So recently, I started trying to do some woodworking projects around the home.  I successfully made a loft bed for my daughter, and I made some floating shelves for our bathroom.

I had some wood leftover from the bed that I made.  I wanted to do something with it, and decided that i would make something for my daughter’s American Girl dolls.  She loves playing with them, putting them to bed, etc., so I figured this would be a great thing to do.  I didn’t do a step by step on this one – however – here’s the final product: (shout out to Kristen for sewing Josie some mattresses and blankets for the dolls, too!) 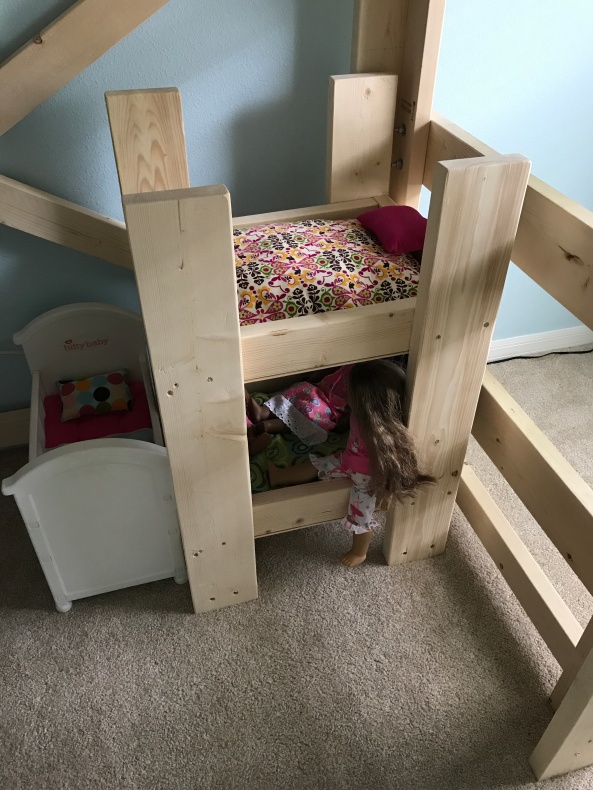 I also have been in a real bind about garage storage.  We’re not one of those families that throws everything in the garage.  We like that space to be usable instead of just a giant hot storage room.  Plus, I want to do more projects for around the house.

When we moved in to our house, the person who owned the house left behind a ton of what looked like scrap plywood.  Us being new to Florida homeownership, we had no idea what it was.  Finally the previous homeowner told us that it was custom made boards to go over the windows in case of a hurricane.  Problem is, it takes up so much space.  Second problem is that many of these boards are starting to warp and fall apart.  I moved them all to this wall, and used some bungees to get them as close to the wall as possible.  Still, they take up a ton of room.  (No, i’m not sure why they were painted.)

The plywood that had been cut out for windows in case of a storm. These take up about 18 inches of space from the wall, and the front part go from floor to ceiling. They run almost the entire length of the garage, too.

I decided that I wanted to try to find a use for them – since there is no where else to store them.  As I looked around the garage, I decided that I could use some of the wood to make some shelving for this part of the garage.

Blank wall that needed some storage.

Our garage is already on the small side.  It’s a “double” garage, but there’s no way we’d ever fit two cars in it.  So storage is a great idea.  This spot had nothing on it, so I figured it was time to be creative.

I started by grabbing one of the sheets of plywood.  It’s 3/4″ plywood, but like I stated, parts of it are warping and breaking apart.  After I found a good piece, I laid some boards on the floor, and grabbed my circular saw, and measured out what I wanted.  It was going to be about a 42″ x 42″ open cabinet.

Here’s where I learned a few things:  circular saws are a great tool, but they’re not the best for making accurate, long cuts.  After all was said and done – I ended up using some extra 2×6 boards to reinforce it.  It’s easy to mount things on the wall in the garage since it’s all cinder block walls.  I don’t have to find the studs, I just have to make sure I avoid any electrical wires! 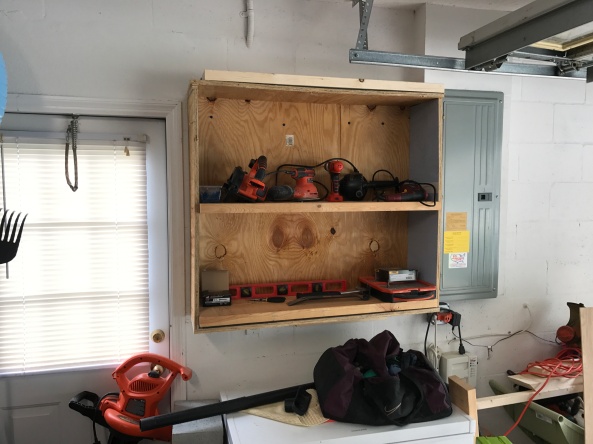 Now I have a place to put my power tools, and some other odds and ends as need be.  Nothing fancy, works great.  I did all of this with just a miter saw and a circular saw — but i’m really starting to wish I had a table saw…