For the longest time, we’ve needed some shelves in our small bathroom.  Our Master Bathroom is one of those that has a small closet toilet room – and that’s where we needed shelves.

We had looked around for some shelves to add, but the walls have a funny angle to them.  Had we bought just some normal shelves from Target or Amazon, we would have had some practical shelving that just wouldn’t have looked all that good.

So I decided that I was going to have build some on my own.

I started off by buying a few supplies –

To do this build, I simply needed a circular saw, some clamps, a drill, and some glue, screws, and I used some small panel nails since I don’t have a brad/finish nailer.

My simple tools of choice – Irwin clamps and a Black and Decker Cordless Circular Saw.

I wanted to use 2x4s, since I had some of those left over from the bed I built earlier, but the simple fact is that it would have made some giant shelves that wouldn’t have looked good in our small area.

After measuring the angle of the wall, I cut the plywood pieces.  I then clamped them together, and sanded the rough edges.  I used my handy Rockwell Jawhorse to hold them together. 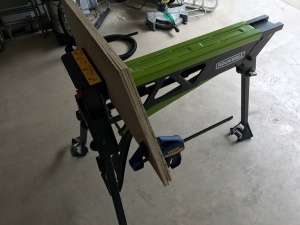 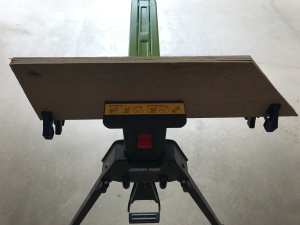 Clamping and sanding the shelves.

After that, I assembled the 2x2s into the shape I needed.

It was time to assemble the shelf cover – I decided to put in some extra 2×2 pieces on the outside to help the structure/support of the shelf.

Using an extra piece of 2×2 to support the shelf. I forgot to take a picture of the front edge during assembly, but I used panel board nails and screws (on the underside).

It was now time to put the brackets into the bathroom.  You can see now the strange angle, and how a straight shelf would have looked awkward.

The brackets installed. Like I stated earlier, I would have put the brackets on the outside, but that’s the only place there was a stud to attach to the wall.

Now that the bracket is installed, the moment of truth was to see if the cover fit…and it did!  Now you can see the nails I used across the front. 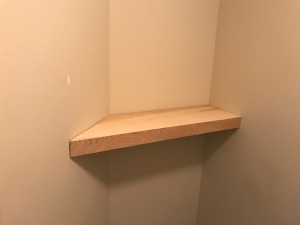 Shelf cover installed, you can see the angle now. 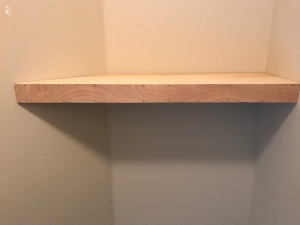 You can see the panel board nails here.

Thoughts from the build:

I wish I had stuck to my 2x4s instead.  It would have offered more stability, however, they were just too large.  The shelves are not what we would call “Super Stable” but they are good enough for what we’re using them for – toilet paper…

Both shelves done. Hoping to finish them with a stain or paint soon. I will secure them to the brackets when we are done.

I’m very pleased with how they ended up looking.  Kristen is going to probably put some sort of finish on them at some point soon, just haven’t decided yet on a stain or a paint.