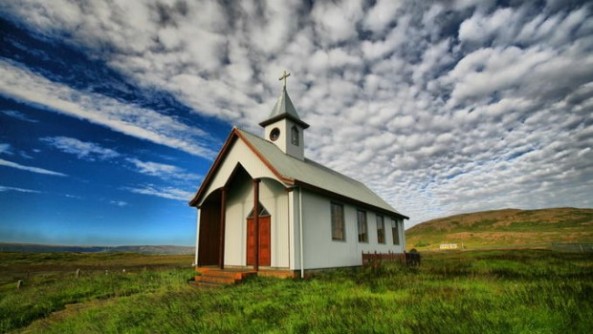 I love giant churches.  I remember when I was a little boy, I would go and visit my grandmother at the Charlotte Avenue Church of Christ building during the week.  She was the church secretary there and I loved going to play in the building.  The auditorium was so beautiful.  I remember the curved pews lining the sanctuary, with the balcony hanging overhead.

But there was also a gorgeous chapel, long halls, a huge education wing – this place had it all.  I was mostly jealous, because my family went to a small church.  My father as the preacher for small churches in and around Wilson County.  When I say small, I mean 25-50 members small.

At one location, my mother would take me and my sister to the back corner of the auditorium where they had strung up a curtain so we could have a “classroom” to use.  It was these kinds of places that I grew up in, learning about the Bible.  So when I went to a giant church building, I could just imagine how much they were able to do there.

My other grandparents went to the Vultee congregation on the other side of town.  These two churches served as two of the largest congregations in the city of Nashville.  I often thought, “This just isn’t fair.”

The majority of my childhood was spent in the Bethel Church of Christ near Watertown, TN.  There were at least a few people my age there.  There was another family, the Smith family, who had 4 girls – Jamie, Sonya, Robbie, and Callie.  Sonya was my age, and Jamie was my sister’s age – so at least we had that.  We even had a classroom, and my mom didn’t have to teach us, because Mrs. Fannie Bell Warren was my teacher, and Ms. Dorothy Jean Smith taught my sister.

What I’ve learned over the past few years is that while large churches can do great things, so can small churches.  The memories I have of Bethel are forever etched in my mind.

Jesse Russell would lead our songs.  We had about 15 songs we sang, over and over again.  He wouldn’t have them prepared ahead of time, he would just get up and pick one by flipping through his book.  His wife Fredda, would clip her fingernail every Sunday.

John Clemmons was an elder.  He was bald as a cue ball.  He always had his hat with him.  His wife, Christine, was a very outgoing and friendly lady.

Willard Warren was my teacher’s husband.  They sat right behind us.  I spent many a Sunday morning sitting with them while my dad would preach.

There was the resident business man, who actually lived in a farm behind the church building.  Dan Smith always seemed like a local politician.  His wife, Vondie, was one of the nicest people I’ve ever met.

We may not have had large programs, and we may not have supported mission works all over the world.  On Sunday, most of the times my father had to preach, and lead a prayer, and possibly serve Communion as well.  But we were a family, which is one of the many parts of what a church is all about.

Last weekend, I preached for the Fernvale Church of Christ.  Its a small church, just left of the hollow log by the creekbank just past the old Wilson place.  Its a church family that doesn’t have a full time preacher.  They like to bring in students, but didn’t have one for this semester that could come out full time.  I was contacted by one of their elders to see if I could come fill in a bit before we moved on to our new work in Florida.

I walked in, and was smacked with my memories of childhood.  Small lobby, two small wings on the side of the building for overflow.  No microphone needed.  And some of the friendliest people I’ve ever met.  Today, I’ll preach for them again.  We’ll drive 45 minutes to get there, and it will be worth every minute.

Let’s not get caught up in how many people are coming to our church.  Let’s not get caught up in the numbers.  Let’s not be people who ask “How many people go to your church?” – because honestly – that just doesn’t matter.  What matters is that the church exists at all, and that is affecting lives for the Kingdom of God.  Large churches are great – they can do so much for the Kingdom.  But so can the small churches.

To those of you who preach and teach at the “small” churches – may God bless you today with and overwhelming sense of His presence.  May God be praised.  Amen.

In Acts 2, we read of many wonderful events that took place as the Church began to take form.  We see the Holy Spirit make a dramatic entry into the disciples as they are all together.  We read of Peter’s great sermon of how he explained what had happened, gave a great account of Christ and his death, resurrection, and exaltation, and finally a plea for all to repent and be baptized.  About 3000 people who witnessed the events of this day gave their lives over to Christ, but more importantly, gave their lives over to each other.

In the verses following these great events, we read in verses 42-47 of how the Church community began to form.  It was marked by the people devoting themselves to the work of teaching, fellowship, breaking of bread and prayer.  From these verses we learn that the church was not just a gathering of people who came together on Sunday for an hour or two, but a group that was dedicated to each other at all times.

The church is facing an interesting dilemma right now across the country.  Generations are growing more and more segregated over issues.  Most of these issues are not even scriptural issues, but traditional issues.  When this occurs, the congregations become even more divided, and you end up with 3 or 4 different camps within one body.  Maybe the reason churches are struggling more over these things is because there is a lack of community in the church.  Sadly, people are more willing to argue and divide than they are willing to devote themselves to each other as the first century church did.

Acts 2:47 says they praised God and enjoyed the favor of all the people.  Because of that, God added to their number daily.  Will you enjoy the favor of all the people you worship with today?  Will you be willing to make that happen more than just on Sunday morning?  Can we put petty differences to the side and join together to spread the good news of Jesus to all?  Let’s be a community of believers, and devote ourselves to each other!