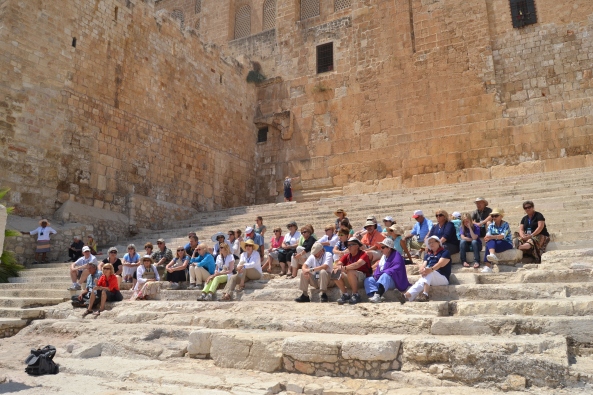 This was a picture of me reading the sermon that Peter delivered on the temple steps in Jerusalem on the day of Pentecost. This was taken while visiting Israel in the summer of 2014.  The steps that are worn are the original temple steps – the ones off to the left have been restored.  It was here where Peter preached the powerful sermon found in Acts 2.

The day had finally come.  Jesus had promised this day to this disciples before he was even crucified, although i’m not sure they really understood that the Comforter was going to be the Holy Spirit.  I’m confident they did not know what the Spirit was going to do for them.

They had watched Jesus ascend into the sky.  The angel had told them “Why are you staring into the sky?  He’ll be back.”  They had already lost Jesus once, but this time it was different.  They didn’t run off.  They didn’t go back to their original jobs.  This time, they knew they had to continue the work Jesus started.

They went back to Jerusalem.  They prayed, along with the women, and Mary, and the brothers of Jesus.  To fulfill Scripture, Peter spoke up and said “We need to replace Judas.”  They chose Matthias after casting lots.

Pentecost came.  There was a gathering of Jesus followers in Jerusalem.  They had been together since Jesus ascended to Heaven.  The disciples were hanging out, and suddenly, a violent wind came from heaven, and filled the house where they were sitting.  Something that looked like tongues of fire came to rest on each of them.  This was the Spirit of God coming to dwell in them.

They spoke in other languages – because in Jerusalem there were staying God fearing Jews from every nation under heaven.  And each of them heard the wonders of God proclaimed in their own language.

Peter gave a lesson that day.  He started off by saying “No, we’re not drunk.”  What a great introduction to a sermon!  He then reminds them of what the prophet Joel had said years before – that the Holy Spirit would come and live among them.  And that everyone who calls on the name of the Lord would be saved.

He then proceeded to remind them about Jesus.  Jesus, of Nazareth, proven to be from God based upon all the miracles and wonders he performed – was here on this earth.  He then reminded them that Jesus was handed over to man, and put to death on the cross.  The good news was that God raised him from the dead, freeing him from the agony of death, because death could not hold on to him.

What they had followed, people like the patriarch David, died, and was buried, and still remained buried.  But Jesus – he no longer was dead.  He arose, and now has passed into Heaven, and sent the Spirit to live and dwell among us.

I love his closing lines.  He says “Make sure you know this – God made Jesus, whom you crucified, Lord of all, and the Messiah.”

The way Peter responded to them is the same way he would respond to us today.  Repent.  Be baptized.  Live with the gift of the Spirit.

That day, about 3000 were added to the Jesus movement.  The Church had begun.  And it still stands today.

Tomorrow, believers around the world will gather together.  We’ll sing songs, we’ll pray, we’ll partake of Communion.  But the simple message of salvation still stands true today.  It hasn’t changed since Peter spoke the words thousands of years ago.

Repent.  Be baptized.  Let the Spirit live in you.

Preachers – there is no reason to make the message complicated.  Peter’s lesson was not overdone.  It was not hard to understand.  It was not agenda driven.  It was simply this:  Repent. Be baptized.  Let the Spirit live in you.

The bible does say with other words he pleaded with them.  He reminds them also to “Save yourselves from this corrupt generation.”  So I guess the 3 point lesson could be this:

That will preach my friends.  Change your ways, be baptized, let the Sprit guide you instead of the world.