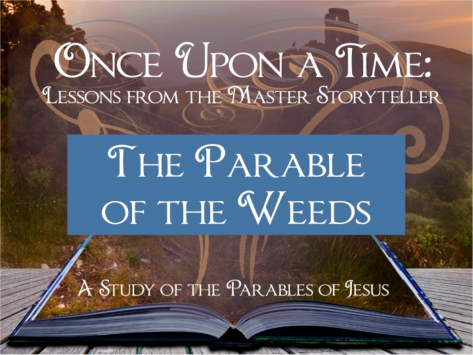 The parable of the weeds has the potential to make us a bit uncomfortable.  That’s because it tells us two very important things that we sometimes have a hard time understanding.

First, it tells us that whether we like it or not, no matter how good we are, we’ll be growing up with weeds.

The kingdom of heaven is like a man who sowed good seed in his field. But while everyone was sleeping, his enemy came and sowed weeds among the wheat, and went away.

When the wheat sprouted and formed heads, then the weeds also appeared. The owner’s servants came to him and said, ‘Sir, didn’t you sow good seed in your field? Where then did the weeds come from?’

‘An enemy did this,’ he replied.

The servants asked him, ‘Do you want us to go and pull them up?’

‘No,’ he answered, ‘because while you are pulling the weeds, you may root up the wheat with them. Let both grow together until the harvest. At that time I will tell the harvesters: First collect the weeds and tie them in bundles to be burned; then gather the wheat and bring it into my barn.’

The parable of the weeds does a good job of explaining why evil exists.  Have you ever wondered “Why does evil exist if God is a good God?”  I believe the answer to that is found in this parable.

In Matthew, Jesus really demonstrates how He has brought the Kingdom of Heaven to earth.  Once ruled by the evil one, the Kingdom is entering with Jesus, and Jesus has left that Kingdom with us.

But when Jesus brought the Kingdom, there were obstacles in the way, namely Satan and his weeds.  The weeds mentioned here are known as “darnel” or false wheat.  They look the same until the ears mature, and until harvest time you can’t tell them apart.

When the grain matures, you see the real wheat bend over from its weight.  The false wheat, when it matures, shoots straight up and is darker in color.

While the darnel has been growing alongside the wheat, it has wrapped its roots around the real wheat, so pulling up the weeds would pull up the wheat.  To add insult to this, the fruit of the false wheat is poisonous.  If it got mixed in with the real wheat while making flour, it could make the whole batch of flour toxic.

This brings light to the topic of “why are bad things still happening if the Kingdom of God is here.”  The answer to that is the only way evil can be completely wiped off the face of the earth is through the judgement and end of the world.

God delays in bringing judgement on this world though because he knows that the evil ones have wrapped their roots around all of us.  Also, God’s delay in judgement is completely gracious on His part.  He is giving more people time to repent and to come to Him.  We’re reminded of that in 2 Peter 3:8,9

“But do not forget this one thing, dear friends: With the Lord a day is like a thousand years, and a thousand years are like a day. The Lord is not slow in keeping his promise, as some understand slowness. He is patient with you, not wanting anyone to perish, but everyone to come to repentance.”

While the sin that has been brought into the world can be blamed on Satan, we need to remember that Scripture tells us that Satan’s activity never jeopardizes God’s sovereignty, and it also never removes the accountability that we have on our own.  We only sin if WE choose to sin.  I Corinthians 10:13 tells us

“No temptation has seized you except what is common to man. And God is faithful; he will not let you be tempted beyond what you can bear. But when you are tempted, he will also provide a way out so that you can stand up under it.”

I’ve never really liked doing the old fashioned “hell fire and brimstone” type sermons – but you just can’t really avoid it in this parable.  The truth of the matter is this:  Heaven and Hell are both very real – and Jesus describes the two places here.

Hell – Jesus says – is reserved for everything that causes sin and all who do evil.  What will happen to them?  They will be thrown into the fiery furnace, where there will be weeping and gnashing of teeth.

Oh, but the righteous – he promises – get this – radiant glory.  Those who do God’s will by becoming disciples of Christ.

The harvest is coming.  I can’t stop that, nor do I want to stop that.  One day, Jesus will come and bring together all the good wheat, those who have dedicated to living their lives for Him, and take us all home to be with Him – for eternity – and Jesus promises us radiant glory.  I know I can’t be alone in saying that sounds so much better than what is reserved for the weeds –